In case I don't get back in until then. And Happy New Year, too!
Merry Christmas!
http://jenanddavin.blogspot.com/2004/12/merry-christmas.html

Even unusual ones. But I guess not everyone does. The pop culture Nativity at Madame Tussaud's has actually been attacked.

I don't know if God would consider this a good thing or not. On the one hand, it was statues of "Posh and Becks," who really aren't renowned for their piety or repentance. On the other hand, they were supposed to represent the Virgin Mary and Joseph. Why are they any less suitable as raw material than the big hunk of marble that became Michelangelo's Pieta?

Speaking of Nativity Scenes, here is a lovely page just full of gift ideas for the person on your list who collects them. Steer clear of the one on this page. Not only are the 20 figures life size, making it way too large to display anywhere (I don't even know where we'll put the tree!) but it's also $29,185.00 which means it cost more than our wedding and all of the children put together...
I love Nativity Scenes
http://jenanddavin.blogspot.com/2004/12/i-love-nativity-scenes.html

In case you run across the name of a public figure and just can't figure out how to pronounce it, the The National Library Service for the Blind and Physically Handicapped has compiled a list to help you out.

They have a wide collection of folks, from pop culture figures, to polical movers and shakers, to poets and murderers. I'm pretty fascinated by this! I wish they had included Chuck Palahniuk, the new pet author of my friend Anne and I.

A-HA! So it WAS poisoning. Everyone has suspected that Ukrainian presidential candidate Viktor Yushchenko was poisoned, but apparently now they have proof. How interesting.

You can't beat fine jewelry that comes with BBs!

Via Dave Barry
You can't beat fine jewelry that comes with BBs!
http://jenanddavin.blogspot.com/2004/12/you-cant-beat-fine-jewelry-that-comes.html

The Urban Legends Reference Page has put out its list of Christmas Mondegreens or misheard lyrics to Christmas carols. Go check them out!
Get dressed ye married gentlemen!
http://jenanddavin.blogspot.com/2004/12/get-dressed-ye-married-gentlemen.html

This year the kids are making Jesse Trees. They're like Advent Calendars that are based on Bible stories and prophesy. Here is the one we're doing right now, as I type even! Davin's working on it with the girls tonight.

This family has made a month long homeschool unit study out of their Jesse Trees, and they even show some examples of trees they've made over time.

I just think this is a pretty neat idea, and I've been wanting to do this for a long time. This year I offered it as a class for our homeschool group's co-op, figuring THAT would make me get it together on time! So, off we go!
Jesse Tree
http://jenanddavin.blogspot.com/2004/12/jesse-tree.html

No wonder he had a headache!

This South Korean man had a 5 cm long nail stuck in his skull for an estimated four years. Surgeons removed it Saturday, I wonder if they found it satisfying?
No wonder he had a headache!
http://jenanddavin.blogspot.com/2004/12/no-wonder-he-had-headache.html 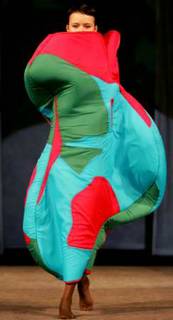 This is a photo from a recent fashion show contest in St. Petersburg. Wasn't there a time when "fashion" was supposed to be related to what people would actually wear? This looks like she's trying to escape from a pregnant sleeping bag...

I don't know how we missed this!

On November 29th, Godzilla got his own star on the Hollywood Walk of Fame!!!!

It does make you wonder what Clark Gable and Alfred Hitchcock would think of this? Oh wait, now that I've found a listing of who else has stars, I'm seeing David Hasselhoff and Mary Kate and Ashley Olsen, so I'm guess they've already done all the rolling in their graves they're going to do.

Also, I didn't know this, but Neil Armstrong has a star, and is listed as a T.V. Personality. I looked up his record at The Internet Movie Database and I'm guessing he got his star more for being an astronaut than for anything groundbreaking he might have done in the field of television. Well, if they're giving them to fictional movie monsters, it doesn't seem like much of a stretch to give one to the first man on the moon.
I don't know how we missed this!
http://jenanddavin.blogspot.com/2004/12/i-dont-know-how-we-missed-this.html

OK, true confession time. Waaaaayyyyy back in the day, I actually did use a hookah in the dorms, too. But I wasn't smoking tobacco. I mean, sure we were all smoking "tobacco" because that's what the head shops sold, "tobacco products and accessories," but it was a complete cover and everyone knew it. Do you suppose these kids are also smoking the euphemistic "tobacco?" Or are they affecting the smoking of tobacco through a hookah, much like the occassional goofy college-aged cardigan-wearing pipe smoker?

Like Grandpa Simpson said, "I used to be with it, but then they changed what it was, and now what I'm with isn't it, was is it seems weird and scary to me..."

Man, based on today and yesterday's entries I must seem kind of wild. The sad fact is that I'm very, very boring now, at least where this kind of stuff is concerned. These days I feel like I'm living on the edge if I let the toddler loose on the carpet without a diaper! Priorities change, and it takes a lot less to keep me happy and fulfilled. Plus, (without going into the wonderful blessings like my husband and children) it seems my skin may have mostly cleared up, and I have a car, so I have a lot to be grateful for now that I'm out of college.

I found this today at Dave Barry's Blog.

It says, "THINGS WE'RE GLAD WEREN'T AROUND WHEN WE WERE IN COLLEGE AND WE WERE... OK, NEVER MIND WHAT WE WERE DOING IN COLLEGE But we're glad this wasn't around." And I have to agree with Dave on this one.

While surfing today I came across this page about foreign body removal in an emergency room setting (don't ask why, I'm not actually sure.) It's actually pretty interesting, but the thing that kind of gave me the willies was how they described it.

Quote: Foreign body removal can be one of the most satisfying procedures performed by emergency physicians. The patient and the physician may both leave the ED with a feeling of accomplishment and satisfaction. Unfortunately, removal of a foreign body also can be a terrifying ordeal for the patient and frustrating for the physician. Unskilled attempts at removal, numerous repetitions of painful techniques, extended searches, improper instrumentation, and inadequate lighting all contribute to both patient and physician dissatisfaction.

Three times in the first paragraph they use some form of the word "satisfy" to describe how a physician feels in relation to foreign body removal. Like when the call comes in that there's a patient on the way with an imbedded fishhook or cactus spine, the doctors all get strangely stimulated, and afterwards they're either extremely frustrated, or ready to smoke a cigarette and drift off to sleep depending on how it went...

Really, I don't like to think of my local ER personnel this way. I think they should reconsider their vocabulary choices in this online textbook.
Satisfying?
http://jenanddavin.blogspot.com/2004/12/satisfying.html

This looks like website that I could really spend some time surfing around in. JournalingLife.com provides a gallery of many different types of journals, with styles ranging from nature, scrapbook, Christian, to genealogical, plus ideas to get you started. And they have links to wonderful looking blank books and pens, for those of you who love to write by hand.
JournalingLife.com
http://jenanddavin.blogspot.com/2004/12/journalinglifecom.html

This reminds me of Boulder, CO

This write-in letter and the response, although from Seattle, remind me of something that happens quite often on the Pearl Street Mall.

Here's the question:
Every day an unkempt man stands outside the grocery store I manage, singing and playing guitar for tips. His playing is monotonous, his voice is a foghorn and customers have complained. Another area store paid him to keep away. Now he's "ready to make a deal" with our store -- in effect, threatening us with more loud attempts at Neil Young songs until we submit. What should I do? -- Troy Bond, Seattle

Um, in Boulder there'd be no point in paying him to move on, since there'd just be some other guy to take his place. And besides, could he really be any WORSE at Neil Young covers than Neil Young was in the first place? I'd say be glad he's staked out the front of your store, at least he's keeping away the guy with the digeridoo or the one juggling actual fire...


This reminds me of Boulder, CO
http://jenanddavin.blogspot.com/2004/12/this-reminds-me-of-boulder-co.html